Ever since I recruited my friend Rick to work on Apotheosis (FKA Worker Learning), that game has made a lot of progress where it would certainly still be sitting in my notebook otherwise. That arrangement is working so well that I would really like to recruit other designers to help me progress my other stalled or (or un-started but promising) designs.

Well established designs that I could use help finishing:
* Automatown - worker placement/resource management game about building an army of robots (which are your workers)
* Odysseus: Winds of Fate - Adventure game about Odysseus on his way from Troy to Ithaca. Play as the Fates, who don't care what happens to Odysseus, but pass the time by betting on his progress (and then influencing it)

Established designs that still need work:
* Reading Railroad - Build words (a la Scrabble) to earn coins, spend coins to build track. Connect cities to earn pieces of set collection scoring
* Moctezuma's Revenge - push your luck / deduction game about looting temples, but some are cursed
Early stage designs that still need a lot of work:
* Rondel Role Selection - Shared rondel / resource management / Role Selection game about splicing DNA to make hybrid creatures such as Hippogriffs
* Kilauea - Mancala game about spreading your people across an island, and sacrificing them to the volcano gods to control the lava flow
* Joan of Arc - Bag building game with shared piece movement. Play as a voice in Joan of Arc's head, vying to get her to accomplish your goals.
Idea stage designs that sound promising:
* Dynasty - Spread your villages across China, upgrade them to Cities, and fill your player board with Culture. You'll assimilate other players' culture, and they yours. When someone becomes Emperor, the winner is the player who's culture is best represented.
* Scourge of the High Seas - Deckbuilder along the lines of Ascension, with 2 buy rows (Tortuga, where you buy crew, equipment and ship upgrades, and the High Seas, where you spend crew and equipment to plunder ships)
Any takers?
Postado por Lula às 01:32 Nenhum comentário: Links para esta postagem

PUBG Mobile Erangel Map Is Getting A Redesign

Erangel map is one of the four playable maps in PUBG. According to a research, more than 80% of PUBG players love Erangel map. This may be due to the existence of high loot, good weapons, tall grass, good hiding locations etc. Erangel map has also a sad untold story.

Reasons behind the update:

Recently, PUBG Corp announced an update regarding Erangel map. This is because many PUBG mobile players have complained to the official PUBG support regarding Erangel map. According to them, they have experienced the following problems:
1. The increase of bugs and glitches in Erangel map.
2. The increase of lag while playing PUBG.
*How to fix PUBG lag?*
3. The sudden crashing of the game while playing in Erangel map.
4. Famous loot locations like Georgopol, Sosnovka military base etc. have very few loots now.
Understanding the problems of PUBG players, PUBG developers have taken a big decision. They decided that Erangel map will be redesigned to improve such errors. They are working on the development of Erangel map. They added that this could take a few months time to finish.
Since loot locations are lacking loot so they assured that the new updated Erangel map will have proper loot locations. They mentioned that some parts of the Erangel map may be changed to make it more interesting for players.
The PUBG team have also decided to work on bugs and glitches and lagging of servers and to improve gameplay.

Which parts will be updated?

An image went viral through a Reddit post when a user posted it claiming that the red dots in the image will be updated in Erangel map. The image is given below:

The PUBG team responded to the image saying" As some of you inferred from recent leaks of a map image, we are working on new ways to balance loot and otherwise improve our maps, Erangel being the first. The addition of compounds is just one way we're testing internally, but is certainly not the ONLY way."
They later added that" Keep in mind that leaked images are usually just a snapshot in time and rarely represent the entire plane or scope of what's being worked on."
The above words said by PUBG Corp. may suggest that after the Erangel map update, the other maps may be redesigned too.

As mentioned above, this update of Erangel map will take a few months time for PUBG developers to finish. The PUBG team has not officially announced any date.
But we expect to get this update after 0.11.5 update i.e  0.12.0 or  0.12.5  update version.
Are you excited about this Erangel map update? What are your thoughts about this update and what update you want? We are curious to know in the comments section below!
Postado por Lula às 21:27 Nenhum comentário: Links para esta postagem 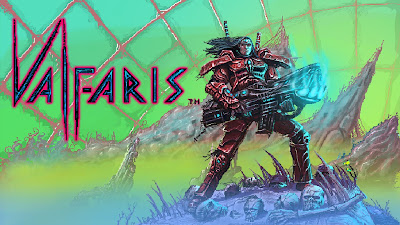 
Touted as a spiritual successor to the underrated Slain: Back from Hell also developed by the two-man Steel Mantis Games, Valfaris packs the heavy in heavy metal and thrives as a two-dimensional action platformer. It's a classic side scroller packed with contemporary goodness; the soundtrack successfully serves to pump up the adrenaline and helps gamers prep for swath after swath of enemies. Appropriately diverse, the latter keep coming, and their onslaught is interrupted only by the appearances of mid- and end-level bosses; they're fodder for mayhem, and provide benefits for even more mayhem by way of their loot drops. 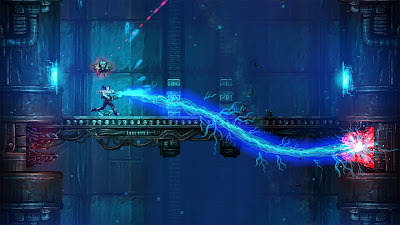 Valfaris sets up the proceedings with a paper-thin narrative about the titular planet, whose disappearance from galactic charts and reappearance to orbit a decaying star sends lead character Therion on an adventure to find and defeat Vroll, the ruler with evil machinations who also happens to be his father. Steel Mantis Games deserves props for continually feeding the story via bits and pieces of interactions between the principal protagonist and his enemies, inhabitants of the planet, and, for the most part, Hekate, his trusty artificial-intelligence assistant.

Make no mistake, though. Valfaris' biggest come-on is its gameplay. Certainly, it makes no pretensions on its primary — okay, singular — intent. Which, creditably, it manages to deliver well. It gives gamers the standard three weapon types to use in encounters: one with infinite ammunition, but whose refresh rate leaves much to be desired; one for melee, which, for every sword swing, likewise serves to replenish an energy meter; and one that cuts through the hordes the best, but requiring, and quickly depleting, said meter to use. A shield at hand can turn defense into offense; activation shortly before an enemy projectile's impact allows for deflection and redirection. 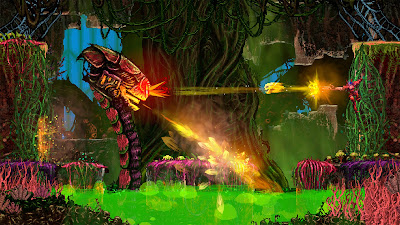 In Valfaris, all the tools of combat are upgradable through Blood Metal, in-game currency found around the planet and gifted by downed enemies. Meanwhile, Resurrection Idols enable gamers to make use of — or, to be more precise, pay for — checkpoints or, when collected and kept, increase health and energy levels. Implicitly, the alternatives encourage rational thought and strategy to get through platforms with efficiency and purpose. Any deliberate assessment is a challenge at best in light of the sheer number of enemies to down, and made even more challenging by the absence of evasive commands.

Valfaris makes no pretensions. In fact, it proudly wears its intense difficulty in its sleeve. That said, it's no Dark Souls, and it does strive to stay fair throughout its 15-hour-or-so runtime. For good measure, Steel Mantis Games has released a patch that adds Full Metal Mode, essentially a "new game plus" option that gives gamers the pleasure of carrying over all weapons and items collected throughout a completed campaign. In other words, they're fully equipped from the get-go should they decide to relive their experience. 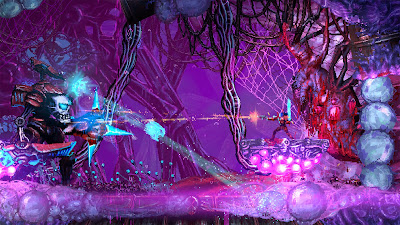 Admittedly, Valfaris isn't perfect, and frustration can set in. For instance, its eight-direction aiming occasionally feels inadequate, leading to crucial misses. And while constant respawns aren't new to the genre, they can make for sudden unexpected battles that render immaterial even the best-laid plans. Even boss fights aren't immune to the odds being stacked too high for comfort; a few have final, at-the-point-of-death attacks that prove the folly of close combat, not to mention minions that take attention away from the most important task at hand.

That said, Valfaris is well worth its $29.99 sticker price. Featuring retro pixel-art visuals and booming sounds that add a sense of urgency to Therion's exploits, it comes off as a polished blend of aesthetics and action designed to kee gamers coming back for more. Highly recommended.