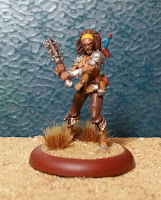 Chief Thunderbringer
Chief Thunderbringer did not set out to create a tribe. She doesn't need minions. Hell, she doesn't even need backup. But her strength of conviction in favor of a simpler time, her courage, and her intense natural charisma seem to draw people to her like some old world guru. She speaks, and people listen. She walks, and people follow. Maybe they are drawn to her sense of self-reliance, to the independence that comes with freeing oneself from the over-advanced technology that caused all this mess. Or maybe they really believe that massive weapon she carries is magical. Regardless, when the boss charges at the enemy like a raging bull, they follow. (model: Helle Moller, Hell Dorado)

A bit of a weird sort, Clarice took the name Distant Thunder when she met Thunderbringer. She claims it's a reference to some old book, but no one knows what she's talking about, nor do they understand the big monstrosity of a weapon she carries. But they are sure an effective pair. Clarice used to be part of the Venus Outpost, but she saw the same old ways that she feels got us into this mess, so when Thunderbringer came and spoke of a return to the earth, she embraced it. She's still a bit of a city girl at heart. She doesn't much feel inclined to wear leather from kills or hunt with a bow- she still prefers her scavenged machine-made clothes and her high-powered rifle. But she seems to have a great love and loyalty for Thunderbringer and the tribe. Besides, her familiarity with the more urban ways makes her a great Representative for the Tribe, since she speaks both languages. (model: Kali, USX Modern Day Heroes, RAFM) 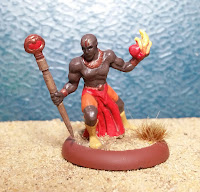 Nightfire
This war shaman uses a disturbing sense of versatility in battle to confound and defeat his enemies. Naturally both brutal and cunning, mutation has given him the power to Cloud the Minds of his enemies in such a way that their distance attacks are unlikely to harm him and any allies nearby. For some reason, when he is there, no one can get a solid lock on him or anyone standing near him. Sometimes he uses that to turn the exposed vantage point of an archer into a kind of one way mirror, so the archer can aim out from an open vantage point, but no one can aim in. Sometimes he uses it to cover his approaching charge, only to beat on an enemy mercilessly with his large staff. While other tribals still think it's appropriate to use technology that is at least several hundred years old, Nightfire, a fanatical purist, will not touch anything more modern than the earliest metal working skills can provide. (model: Bones, Reaper Miniatures) 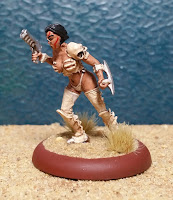 Bone Dancer
Bone Dancer is the vengeful spirit of the Stormbringers. She sees the apocalypse as humanity's punishment for its crimes against nature, and of all of the tribe, she is, perhaps, the most angry about it. As such, her bitterness, and the natural sense of insanity that comes with living in the Wasteland, have convinced her that she is an agent of death, brought to the world to avenge the cries of the earth upon those who would harm it. She has very little tolerance for anyone who is not a tribal, for she believes all other humans are a blight upon the earth, and she will not rest until nature is avenged. (model: Maia, Another World Miniatures) 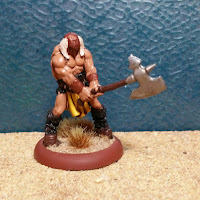 Battering Ram Cleave
A jock and gamer before the apocalypse, Connor's life didn't change much when the world ended, except that now he was actually doing all the stuff he pretended to do in his MMOGs. And now, he can work out all day instead of wasting time at some crummy day job. When the tribe needs him to do chores, he does the heavy lifting. Suits him just fine. Who needs a computer or gaming console when you have the real thing? (model: Bones, Reaper Miniatures)

Stinger of the Rad Wasp
Stinger wasn't always the mighty warrior she is today. Before the world blew up she was a spoiled, rich, girly-girl, whose idea of a catastrophe was a bad hair day. But sometimes the end of the world changes a girl, and since then she's beefed up and traded in her shopping bags and purse for armor and a spear. She still has that natural, pasty skin tone, though. Not that anyone makes fun of her for it anymore. (Model: Unknown) 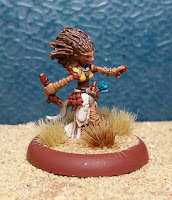 Little Rad Rat
There's a reason you don't see many kids in the wasteland these days. Most of them don't make it. They don't have the speed, endurance, or street smarts, so unless they have a protector strong enough to keep both of them alive, they sadly perish. But Little Rad Rat is a natural street urchin. Thunderbringer saw her making it on her own one day, and was impressed. But Rat is also smart enough to know that being part of a team has its advantages, so when Thunderbringer flashed her a little half smile, she tagged along and eventually came to be accepted as a full-fledged member of the tribe. She has yet to prove her skills on the battlefield, but she never needs rescuing either, and is very handy when getting through small spaces is a necessity. (Model- Reaper Bones) 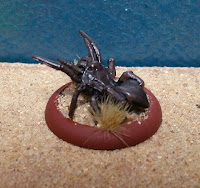 Fangs
What else would you call a giant spider? Fortunately, this one is on our side- if you're a Stormbringer. The tribals have this unnerving capacity to attract loyal animals from the wastes. The Stormbringers are no exception. They refer to them as "totems". You you get used to them wandering around the camp- eventually. (Model- Reaper Bones)